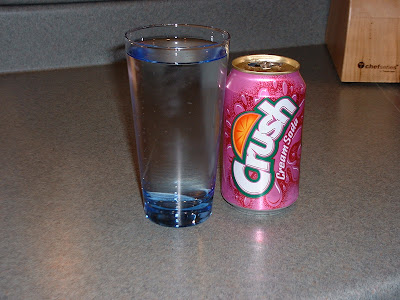 For me, this began last year around Halloween. I purchased a Rainbow Pack of Crush pop from Wal-Mart. I opened a can of cream soda, and lo and behold, the liquid was clear in color instead of the usual red/pink. I thought to myself, hunh, I wonder if they're changing the color? If they were, I wasn't a big fan of that idea because I like the red. It's the only brand that is red in color.

My co-worker came in the office today with a plastic bottle of cream soda and we got to talking about how I had seen clear cream soda. He said he knows he's had clear cream soda before, but thought they just produced two different colors normally. In true John fashion, I decided to call the 1-800 number on the side of the can. I was determined to figure out what was happening to Crush cream soda.

I called in and explained my question, thinking I would hear the answer of "yes, we're phasing out the red color" or "we produce two different colors all the time." The answer I received, from a concerned-sounding agent, was that cream soda should always be red. She said the clear color was a quality issue. She asked me if I had the can with codes printed on the bottom, the UPC bar code from the outside of the pack, when it was purchased, and at what store. I was at work, so didn't have the info handy. She gave me a case number and asked me to call back with as much information I could find. From the information, she wanted to contact the manufacturer about the issue. She also suggested I not consume the product -- not because it was unsafe, but that it may not be up to the same quality standards and might taste slightly different.

The last batch of cream soda I purchased was from Costco a few months ago. I knew that pack also contained the clear cream soda, so tonight I came home and opened the can to verify. I will take the can and call the 1-800 number back again and give the info.

What's weird is that I know for a fact that I have walked past bottles of cream soda in the grocery store as well as a convenience store that have had clear colored cream soda. I've seen it enough times now that I automatically assumed that they were making a product change. The company, however, insists that this is not the case. So what is the real story behind this clear cream soda?
Posted by liz

I think the bottles that are clear are actually called Cream Soda Clear.

A google search brings up that in the US cream soda comes in a varity of colors (and flavors oddly enough).

You're going to have to prove that one to me. On this can that I have, the ingredients list "colour", yet there is no colour in it.

I do agree that there are many colours/flavors of cream soda, but Crush has always been red... that's what intrigues me about this can of clear Crush.

I know that they are putting out bottles of Cream Soda Clear here in SJ, but I don't know about cans. I'll ask one who may have some answers (she'll have very few mind you teeheehee) and see what comes back.

Yip I've seen bottles labeled "Clear Cream Soda" as well. However, it's been a while and I'm fairly sure it was a different brand.

This would be so wrong! Wrong, I say, Wrong!

While everyone else focuses on the color, I'm most impressed that you called the company, spoke with them, and brought this issue to their attention. Way to go! How very American of you! :-D

I've called Pepsi enough times with questions, comments, and concerns, that I actually receive a happy birthday card from them most years. And sometimes coupons for free drinks. ;-)

I know this post is old but I just found it while I was researching the color issue about Cream Soda.

Just so you know, both clear and red cream soda exist in Canada and are perfectly safe.

In fact, in Quebec province, we mostly have clear cream soda and the red is really tough to find. The rest of Canada have both colors.

You might be interesting in reading this article which is explaining the history behind cream soda: http://en.wikipedia.org/wiki/Cream_soda

I know its been a while, but Clear Cream Soda is different. I prefer it, and have only found it in Canada. Red Cream Soda has a different flavor, and brown or yellow is usually vanilla. Clear is straight cream soda and it tastes like dum-dum's lollipops cream soda.

Crush Cream Soda in Quebec (canada) has always been clear. In other provinces it's red. Clear Cream Soda is mostly produced by smaller manufacturers, here in the US most cream soda on the East coast is brown.

I'm from Newfoundland and there we have both white and red cream soda....no there is no need to be worry about it not being ok to drink. In fact I prefer the taste of white over the red any day. It is AWESOME!!! Try It!!!

While living in Québec I came across a can of Crush Cream soda in the normal pink can, and it poured out clear. I was super confused because in Ontario Crush is normally pink. I too was curious so I called the 1-800 number. The operate suggested I didn't drink it and sent me coupons for a free case of pop anywhere in Canada.

I googled it and found a bunch of websites that listed places where clear Crush was sold....Québec was on the list.

JOKES FROM THE ROCK said...

Crush White (Clear ) Cream Soda is only available in Quebec and Newfoundland. Why I don't know, but it's a fact.

By sj do you mean st.johns NL

No it hasnt in the 80's they sold clear as well.
Now only in Quebec :(